Onset of monsoon triggers fear of vector-borne diseases in Hyderabad

No single-use plastic from July 1: Centre

Mauzo’s stories not just embrace unconventional themes, they also border on the bizarre, but the best thing is their open-endings 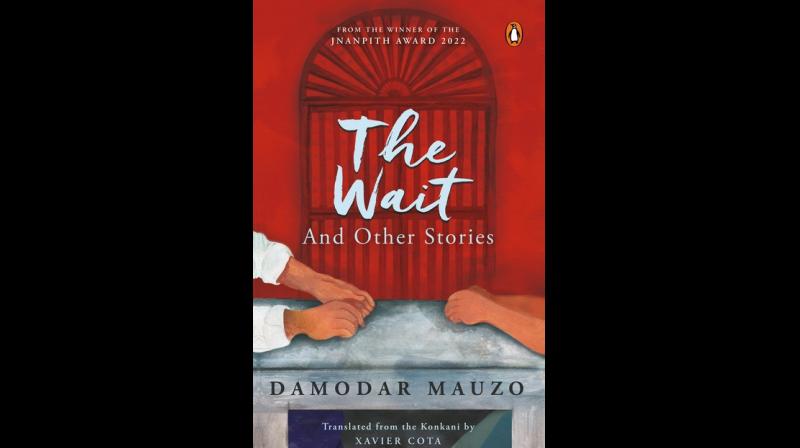 Coverpage of ‘The Wait and Other Stories’. (Image By Arrangement)

I was a bit apprehensive when I received my review copy of The Wait and Other Stories written by Damodar Mauzo, translated into the Konkani by Xavier Cota. Mauzo is the 2022 Jnanpith Award winner and comes with an aura surrounding his writing. I tentatively started reading, the way a swimmer dips their toe in water, to test the temperature.

The first story titled “The Wait” is about a man Viraj, working with a builder. Viraj reminisces about his broken engagement to his girlfriend Sayali. Viraj and Sayali’s relationship suffers a misunderstanding and a breakup thanks to his sister’s interference. On Sayali’s birthday, Viraj visits the secluded spot he and Sayali used to frequent in the evening. There he sees a couple making out. They part with a promise to meet tomorrow. Viraj realizes that the man is the same person who visited him in the morning in his office, the man had come to cancel the booking of his row house. Viraj visits the same place the next day, assuming the couple will have their rendezvous at the same time, but this time there is a villain in the picture. This story had a faint tinge of the comic.

In the story “Yasin, Austin, Yatin”, you will meet a taxi driver who takes on different identities, depending on the passengers he is ferrying around Goa. But with one particular passenger, the taxi driver finds himself in a sticky spot. Many of the readers will be nodding their heads, as most of us have been ferried by such talkative taxi drivers who have an opinion about everything under the sun.

The ending of the story titled “Burger”, had a nice twist. It’s about two school girls, a Hindu girl Sharmila and a Catholic girl — Irene, and their habit of sharing the contents of their tiffin box, in school. It reminded me of my own school days.

Some of the stories have very unconventional titles: “I Haven’t Tied My Shoelace”, “Gentleman Thief”, “I Was Waiting for You”, “The Next, Balakrishna”, “It’s Not My Business”.

Two of the characters who appealed to me the most were Vasudev in “The Next, Balakrishna”, and Brendan in “The Coward”. Dusky Vasudev with his wife Devaki and her penchant for a fair-skinned man, had my heart-strings tugging constantly. I had a soft corner for Brendan labelled a coward by his father.

Mauzo’s stories not just embrace unconventional themes, they also border on the bizarre, but the best thing is their open endings, where the readers can interpret them in any which way. No two people will see the stories in the same way.

Mauzo’s stories take some time to get used to, like a new dish one is served. One tentatively samples it, not knowing what one will get, not knowing what to expect. But when the flavours burst in a cascade of sensations on one’s tongue, one is not just pleasantly surprised,but also gets the confidence for the next spoonful. The next bite reveals another set of flavours, totally unexpected, setting up a thrill of excitement. By the end, the entire dish grows on you, so that the next time you visit the same restaurant, you confidently request the same dish. As it becomes a case of once tasted, twice favoured.

Mauzo’s writing brings to life the simple lives of characters in small towns of Goa. There are no beach parties or rave parties, no swinging nightlife, just simple folks living their humdrum lives, much like the characters and stories of R.K. Narayan’s.

His writing though simple, is extremely readable, but the stories are multilayered, giving the readers a lot of food for thought.It took me sometime, a couple of stories to warm up to Mauzo’s style, theme and treatment, but I was soon hooked.

nextPlastic use may trouble TS amid Bonalu