India has eliminated all queues by going online: PM 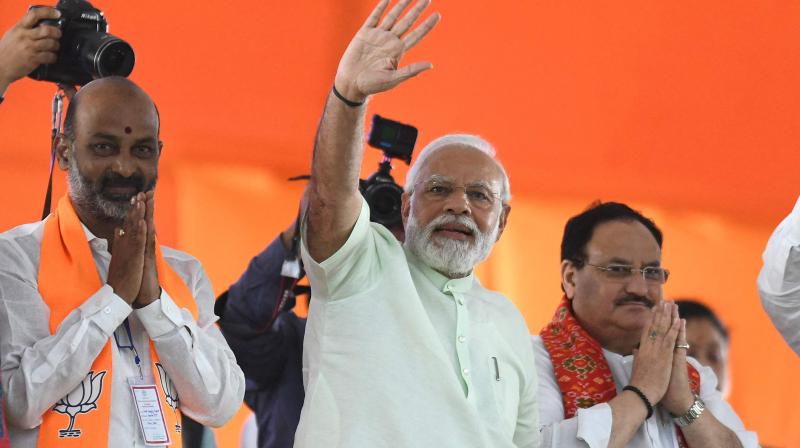 Prime Minister Narendra Modi (C) along with party leaders waves towards his party supporters as he arrives to address a public meeting at parade grounds in Secunderabad. (AFP)

Hyderabad: Prime Minister Narendra Modi on Sunday said that the BJP was growing rapidly and continuously in Telangana since the 2019 Lok Sabha polls, which is reflective of the strong desire of the people of Telangana to install a ‘double engine sarkar (BJP government at the Centre and state)’ soon.

The PM announced setting up a mega textile park in Telangana as part of the Centre’s decision to set up seven such parks across the country to increase textile exports from India and generate employment.
Addressing a mammoth public meeting titled ‘Vijay Sankalp Sabha’ at Parade Grounds on Sunday to mark the conclusion of the BJP’s two-day National Executive Meeting in the city, the PM stated that the ‘double-engine sarkar’ in Telangana would ensure faster development and prosperity of the state.

“People of Telangana gave a good mandate for BJP in 2014 Lok Sabha (polls). Their support for BJP increased in GHMC elections and Assembly bypolls. This shows that people of Telangana yearn for ‘double engine growth’. In other states too, we have seen double-engine government of the BJP has led to increasing trust of people. By extending continuous support to the BJP, the people of Telangana are paving the way for BJP’s double-engine government,” Modi said. He said Telangana was a beneficiary of various Central welfare schemes and development programmes in the past eight years. He also listed the benefits in eight years of the NDA regime, in terms of new road networks, national highways, railway lines, Mudra loans, PM Ujjwala Yojana, paddy procurement etc.

The PM lavished praise on Telangana, its history and its culture. “People of Telangana are known for their hard work. They are highly talented. Telangana is known for its rich history and culture, and its art and architecture are a matter of pride for all of us,” Modi said.

Modi said that in the past eight years of his government at the Centre, several policies have been launched for the welfare of the poor, Dalits, backward classes, and tribal people. “That’s why people from all sections of society have increased trust in our govenment and its policies,” the PM said.

Modi also heaped praise on Hyderabad city. He said, “Hyderabad is the symbol and centre of self-reliance and self-confidence in the country. There is similar potential for several other towns and cities in Telangana. When BJP’s double-engine government is formed in Telangana, it will put development of these cities and towns in fast track mode.”