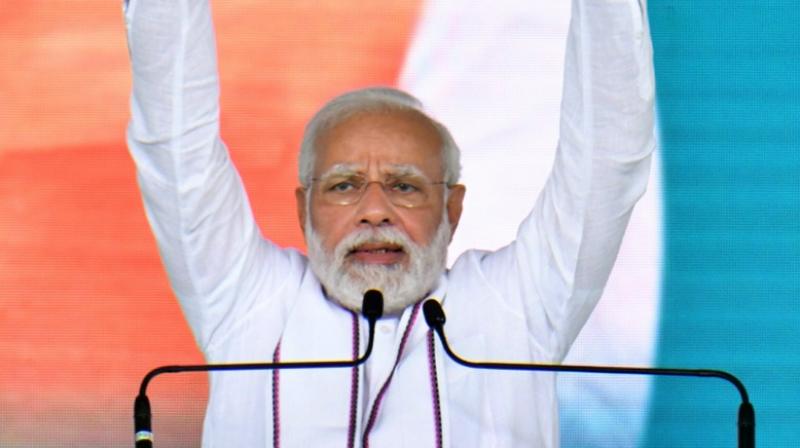 Gandhinagar: Praising the role of digital technology in changing the lives of people of the country, Prime Minister Narendra Modi on Monday said India has eliminated queues or lines by going online and offering a host of services.

In the last eight years, he said, the DBT (Direct Benefit Transfer) initiative, which aims to transfer subsidies or financial assistance directly to eligible beneficiaries through their linked bank accounts, has saved Rs 2,23,000 crore which were otherwise going to ineligible people.

Highlighting the importance of his government’s Digital India Mission, Modi said time will not wait for a country which does not adopt new technology when required and maintained the country had suffered this during the third industrial revolution.

“But now, India is guiding the world about the fourth industrial revolution – Industry 4.0. Gujarat has taken a lead in this initiative too, as the state had already taken initiatives like data centre, GSWAN, e-Gram and ATVT Jan Seva Kendra” said Modi, referring to measures taken on the digital front by the state government when he was Gujarat CM.

The experience of launching those initiatives in Gujarat became the foundation for the Digital India Mission, he said, adding the nation-wide programme of the Centre has given relief to the poor from corruption and it is working for elimination of middlemen in all fields.

The PM said the combination of Jan Dhan bank accounts, Aadhaar and Mobile, called ‘JAM’, has benefited the poor as well as the middle class more than other sections of the society.

While explaining how Digital India initiatives are saving people’s time, as they are no longer required to visit government offices, Modi shared an experience of his Lok Sabha constituency Varanasi, where he learnt that labourers and poor citizens were preferring to travel by premium semi-high speed Vande Bharat Express train despite it being costlier than regular trains.

“The (Varanasi) station master said the train serves two purposes. It not only provides more space to keep the goods, it also saves 6 to 8 hours of their travel time, which these labourers can use to earn more money. This extra money would easily cover the high ticket fare (of Vande Bharat Express). This is the true example of (the proverb) time is money” said the PM.

Recalling his days as Gujarat CM, Modi said many people had objected to his plans to disburse widow pension through post offices or banks, saying it was difficult for beneficiary women to come out of their homes to collect the amount.

“When I remained firm on the plan and started its implementation, we learnt many ineligible persons were taking that pension by posing as widows. That was the reason why those who were opposing my decision wanted to continue it. Using the Direct Benefit Transfer (DBT) route, we have deposited over Rs 23,00,000 crore directly into the bank accounts of real beneficiaries in the last 8 years,” said the PM.

He said the DBT initiative has saved Rs 2,23,000 crore which were otherwise going to ineligible people.

The PM informed the audience that biometric information of Aadhaar has so far helped in finding nearly 500 lost children and uniting them with their families.

“In May, nearly 1.3 lakh UPI (Unified Payments Interface) transactions took place every minute, which come to nearly 2,200 in one second. World’s 40 per cent digital transactions are happening in India. Many countries are showing interest in our digital products such as UPI. These tools have scale, they are secure and they have democratic value,” said the PM.

UPI is a system that powers multiple bank accounts into a single mobile application (of any participating bank), merging several banking features, seamless fund routing & merchant payments into one hood.

He said the “double dose” of Digital India and Make in India (push or local manufacturing) will help India in scaling new heights in the ‘Industrial Revolution 4.0’.

On the occasion, the PM launched several new digital initiatives such as Digital India Bhashini, Digital India Genesis, Chips to Startup and My Scheme.